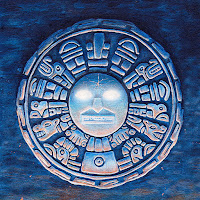 Cholo Visceral is a progressive psych rock band from Lima, Peru, and as you might have guessed this is their second album. Vol. II was released last year and followed the self-titled debut put out in 2013. I was immediately reminded of early Gong when I first put the album on. Just listen to the wildy progressive and suitably spacey 12-minute opener "Explosión del Misti". The use of saxophone is of course partly the reason, but the music has lots of similarities except it's mostly instrumental so no pot-head silliness here as such. Having said that, there is also more in the mix. I think I can hear some Zappa influnces (for example on the pretty experimental and weird "Cholo Visceral") and "Jarjacha" is mostly acoustic with some nice vocals in Spanish. "10 Anos de Terror" has some pretty oppressive King Crimson vibes and a cool, groovy beat at one point. The last, ambient track "El Paso Entre las Lomas" is almost like musique concrete. All in all, this is a very interesting, varied and highly proggresive 2LP with mostly long tracks full of great ideas and musicianship and enough psychedelic elements to keep the spaceheads happy as well. I'd still mostly recommend this to the prog rock fans. Check it out!