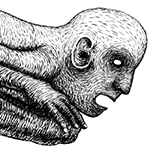 Viaticum is a rather fresh band from Switzerland. This double vinyl album released in 2014 by the band themselves is their second release. There are eight songs on the 2LP and most of them are pretty lenghty. I like most of the album, but not everything. The first track "Colonize Me Gently" made me think is this supposed to be cosmic or psychedelic rock? Okay, luckily things get much more "out there" on the following, long (13:14) and atmospheric stoner rock jam "Fat Heart", one of my favourites on the album.

Viaticum's music changes from heavy, fuzzy stoner rock to melodic post rock/metal and there's also some prog, punk/noise rock and and even reggae influences ("Shittle-12 Hates People") in there to make things even more varied. I like the fact that they tend to be adventurous, but personally I might have edited down the album a little bit. Having said that, at their best Viaticum definitely delivers the deep, hypnotic and heavy stoner rock vibe many people grave for. They can also create those moody, chilled-out moments that are very welcome in between the heavy, intense parts. To my ears the band works best on the instrumental passages, but it's a good thing that there are also a little bit of vocals every now and then. They might use some more effects on the lyrics next time, if you ask me. Sometimes the vocals work out fine like on the beautiful "Hintergrunderfüllung".  "Entity" is one of the most straight-forward rock track and somehow reminds me of Monster Magnet. Some of the long instrumental parts have some Swans or GSY!BE vibe in them. There is mainly just guitar, bass, drums and vocals on the album which is fine of course, but for example some spacey analogue synths would have increased the "kosmik" factor. All in all, this is an album worth checking out since I think many readers of my blog might enjoy Viaticum Plays Kosmikrock. Oh yeah, it's also out on CD-R.