Kanoi: From the City to the Stars 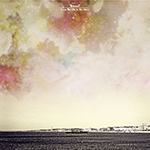 I had never heard Kanoi before Clostridium Records generously sent me their first LP limited to 500 copies a couple of months ago. Kanoi is a solo project of Benjamin Kantschieder from Austria. From the City to the Stars was recorded in 2012-2013 and released in 2014. Clostridium Records has already put out a new album by Kanoi this year, but I don't have that one yet. This debut album has a laid-back, sort of bluesy vibe and includes six, rather varied songs.

The album starts off with the slow, bluesy and a bit stoner rock styled title track. The sound is pretty primitive and nods to the original heavy psych age of '68-'70. There's nothing special here, but it works in its own genre, although I'm not exactly transported to the stars. The only psychedelic element is the effects on the meditative vocals, although the guitar freaks out a bit too. There's just guitar, bass, drums and vocals, like on most of the album. "Cracks" is an older track but remixed here, and it's a more acoustic, peaceful and pretty affair. "Witch Mt." is heavy boogie rock in the vein of The Groundhogs.

The second side begins with the folky and tranquil "Obstacles" and this gets closer to space in my mind also sounding a lot clearer that most of the songs. Very nice! The mid-tempo heavy psych rock piece "The Heather Blazing" brings to mind The Bevis Frond which is not a bad thing in my books. The solo guitar work is pretty neat as well, but the sound definitely rather primitive. The album is finished with the moody "Suspicions Aside" and it is a slow, folky/country styled piece with some acoustic and slide guitar that gets heavier towards the end with some cool, psychy guitar soloing. Check this guy out, he has tons of stuff on his Bandcamp site!