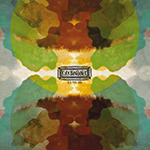 It's a rare but very cool situation that I have already bought an album that I really like on vinyl and then receive a promo copy on CD but that's what happened here. Kirkbinsinek is an excellent psych/prog/ethno/space rock band from Turkey and I'm digging them a lot! Sis Pus Sus already made it to my July hotlist so it's obvious I enjoy it a lot, but let's get beyond that now...

Now I don't really know that many modern Turkish psych/prog/rock bands, but they have a long tradition in this kind of music since the 60s as a potlach of Western and Eastern musical traditions. Just think of Erkin Koray for example! Anyway, as far as I know, Sis Pus Sus is the first album by this heavy psych prog band from Istanbul. It's obvious that the members have been playing music for a long time since they are very good. The album includes nine original compositions that have just the right amount of ethnic, Turkish elements in melody, rhythm and vibe to make things sound interesting. They also sing in Turkish which sounds pretty exotic as well. Their music is quite progressive but not too difficult to enjoy. There are plenty of psychedelic and spacey parts but also folk elements enhanced by the cello player. Other instrumentation includes just electric guitar, bass and drums but that's plenty for this marvelous band. They also have that groovy element that reminds me of Korai Öröm from Hungary, but without the trance/techno elements and synths. Sometimes I'm also reminded of I won't go through all the tracks individually here, let's just say that there are no fillers and I definitely command you to listen to this album as soon as possible!