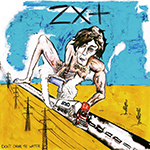 ZX+ is a solo project of Twisted Wheel's bass player Stephen Evans. Yet another artist introduced by the Fruits de Mer, by the way! Don't Drink the Water that will be released next month is ZX+'s fourth album, I think. Stephen is also a fluent guitarist and great singer, and there are some backing vocals by Joanna Cooban on a few tracks and Mark Coupe helps on drums. The album has 13 tracks but lasts only 31 minutes, so the songs are pretty short. Musically Stephen does everything in between energetic indie rock, melodic pop, psychedelia and atmospheric folk rock. None of the songs are really that out-there or spaced-out, but there is a small hint of psychedelia present most of the times. For example "Kurtz" also has some progressive elements. Many songs are pretty fast and furious, and there's also some faint punk and garage rock influences in there I guess. My favourite is "Pet Semetary" that has a really beutiful chorus and perhaps some 13the Floor Elevators vibe on it's verse. Great! Some other tracks I really enjoy are the Bevis Frond-like "The Crazies", "The Desert" with its heavenly vocals, and the powerful and stylish "The Raven". I can hear some David Bowie somewhere in there I think. There are no fillers in this pretty varied album that manages to make an interesting, whole listening experience. My only wish is that Stephen could sometimes extend his songs a bit and give room for some mind-altering jamming etc., but I understand that not everybody wants to do that and they don't have to... This is great album, check it out when you can!