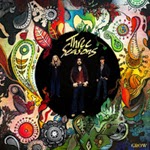 Three Seasons is another hard rock band from Sweden. Having said that, they do have something extra to offer that your average 70s influenced Swedish heavy blues bands that seem to be everywhere don’t usually have. Sure, you can hear the usual Zeppelin/Purple/Heep/Gillan/Whitesnake vibes from time to time, but these guys somehow can do it freshly and in an interesting way. They also got some psychedelic touches which makes things tastier for sure. This new album will be released tomorrow and they have put out two albums and one 7” before so they already know what they’re doing. I like the fact that these guys are not afraid to throw in a good, long guitar solo, or put some extra delay on the vocals when needed. Also the singer and rhythm section are excellent, and organ is of course essential in this kind of music.

There are eight tracks on the album and there are no fillers included. The two first ones “Which Way” and “Drowning” rock out pretty hard, while the third song “By the Book” is a bit slower, mellower and more atmospheric although it still has some fuzz guitar. “Tablas of Bahar” is an over-seven-minute epic instrumental that also has some great acoustic guitar passages etc. At first they definitely have aimed to Led Zeppelin in 1973 vibes and done a great job at it. The mid-tempo, heavy boogie starts around the three-minute-marker, and the ending is more open and adventurous again. Perhaps my favourite! “Food for the Day” is more basic heavy, bluesy hard rock again. There’s also some Cream in there I guess? “No Shame” is the mandatory blues ballad that I usually just skip, but there is some great stuff in the middle. “Home Is Waiting” reminds me of some of the late 60s heavy blues/prog bands and sounds pretty refreshing actually. The longest track (at 9:55) is “Familiar Song” that ends up the album. It starts off very peacefully but grows after a few minutes and starts to rock out. The end is very tranquil and slow again. Not bad at all! This album might not include anything totally spectacular or mind-blowing, but I’m sure it’s one of the best in the heavy 60’s/70’s progressive hard rock genre at the moment.