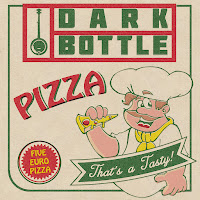 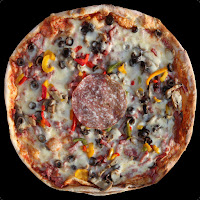 Okay, this must be the funniest and also one of the weirdest vinyl albums I've ever received for a review... The LP cover is designed to look like a pizza box and the picture disc has pictures of both sides of a standard Finnish five euro pizza! Dark Bottle is a band from Tampere playing an eccentric mix of folk, rock, county, rockabilly, kraut, psych and even doom! Most of the seven songs are written by the lead singer, five-string banjo and resonator guitar player Donald Lupo and tell about the funny things you see and experience in Finland as a foreigner... You really have to be a Finn or at least have lived here for some time to fully understand the hilarious lyrics on tracks like "Ballad of the Five Euro Pizza", "Perusulkomaalainen Blues" & "Bad Brownie #14"... The music is mostly rather up-beat and would go down well live with some beer & whiskey (and maybe pizza...).
What's most interesting for me is that in addition to the funny, energetic folk rock the band  also has a deeper, melancholic and even psychedelic vibes. The first sign of this is the A side's seven minute closer "Nothing Ever Happens on the Highway" that gets rather heavy towards the end. Also the otherwise pretty country rock oriented "I Only Wanted a Home" has a psychy, heavy middle part. The highlight for me still is the eight-minute rendition of the traditional "Pretty Polly". It gets rather hypnotic, mind-expanding and rocking at some point bringing to mind Circle even! Very nice. It would be interesting to see these guys live one of these days. 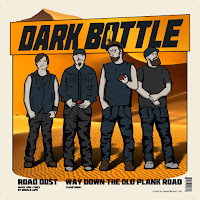 I also received a 7" split EP by Dark Bottle and German band New York Wannabes. It includes two songs by both at 33 1/3 rpm. Dark Bottle's "Road Dust" is a fast folk/punk/pop tune that makes your adrenaline levels rise. "Way Down the Old Plank Road" is an old traditional American folk song about (not) drinking (anymore) and it's another fast blast to get you buying another pint or two. The two-piece New Your Wannabes are a bit more trashy garage rock psycho blues group from Frankfurt. For this little split recording they offer two tracks: "Dear Father" and "Out in the Desert". Just guitar, drums and vocals with no fancy overdubs. Pure and simple, but not exactly my cup of tee. Not bad, though.