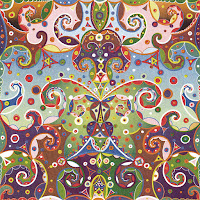 Swedish experimental prog/psych rock band Å (it means stream in Swedish if you were wondering) have returned after three years with their second album. Like the first, same titled LP in 2014 this is a highly limited (200 copies only), self-released effort. The band is Joel Öhlund (vocals, guitar/bass guitar), Milovan Fredriksson (guitar/bass guitar, backup vocals) and Erik Wallin (drums) with a couple of guests on flute and synthesizer. The music differs from heavy, hard-rocking psych to more pop-like stuff and traditional folk rock. The lyrics are in Swedish.

The album starts off with the hard-hitting and progressive "En Orm" that brings to mind King Crimson a bit. Nice! "Satan på Gatan" sounds at first a bit like Nuclear Nightclub era Wigwam or Dungen and later on things get very mystical and psychedelic during the long jam part. I like the guitar tone and playing in here! "Uti Vår Hage" is a traditional Swedish tune and has a cool, melancholic vibe. Brings to mind early 70s progressive folk rock bands from Sweden. "Följer Du Med Mig?" is the albums longest track at 12:22 and tight and heavy, progressive rock pounding. There are also more atmospheric, even jazzy soft parts in the middle. Great playing on this one again, and I also really like the vocals. Some spacey synth sounds in there as well. The album is finished with the slowly starting instrumental "Rustem" that is another traditional and gets rather intense and progressive later on. These guys can play and have a lot of great ideas so check them out!