Superfjord: It Is Dark, But I Have This Jewel 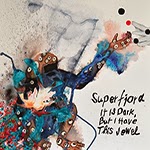 Superfjord is a new psychedelic band project by ex-Kevin member Jussi Ristokaarto featuring members/guests from various Finnish indie rock/pop bands like Liekki, Pariisin Kevät, Rubik, Xysma, The Hearing, Siinai etc. in its different studio and live incarnations. Jussi sent me his version of Coltrane's "A Love Supreme" a few years ago and I could instantly tell that he was into something. I'm happy to say that a new version also found its way to this very deep, spiritual, meditative and psychedelic instrumental debut album!

The album includes seven tracks. The opener "The Great Vehicle" introduces hypnotic, Manuel Göttsching styled delay guitars, monotonic but rather soft rhythms, lush keyboards & synths and soulful, jazzy saxophone that also freaks out a bit. You are transported into this other, dreamy and wonderful world right away! "A Love Supreme" is without a doubt one of the highlights here as well as in their live sets and also very psychedelic with some spoken word samples and lots of effects, great guitar solos etc. Just close your eyes and float away, wonderful! "I Play with Flowers and Their Fragrance Clings to My Clothes" is a very nice acoustic folk number with some bird-song and you can image yourself laying on your back on a field on a pleasant summer day. "Mai Huli'oe I Kokua O Ke Kai" is a groovier, sort of funky track with percussion and kind of reminds me of some of The Hypnomen stuff. Very nice! "The Chandrasekhar Limit" is an experimental, droney and floating ambient piece at first, but a slow, relaxing beat is added later on and we also get some dub influences and lots of uplifting stuff. The dream continues in a very cool way. One of the most mind-altering tracks is "La Locura / Tonttumauste", very hallucinatory and weird stuff and I love it. The ending sounds a bit like Neu... The last track is called "I Seem to Have Forgotten What We Were Talking About" and it's again a slow, soft and dreamy piece with some excellent guitar and other stuff. I'm really glad that people are making this kind of music in Finland right now and I warmly recommend this album to everyone into psychedelic, dreamy, jazzy, groovy and hypnotic instrumental rock/pop. Personally, I'm really looking forward to the LP version of this album. If you happen to be in Helsinki tonight come and see them live for free at Henry's Pub in Kamppi!