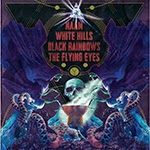 This very cool four-band-compilation released on CD and 2LP is one of those promo downloads that I always seem to forget to review in time... With White Hills on board the spaceship I of course pre-ordered the limited to 70 copies gold vinyl with CD bundle, but still didn't realize that I was also supposed to review the thing. Well, better late than never I guess.

I must confess that I still don't have any releases by US band Naam, who just played at our Slip Inside This Club in Helsinki last Friday and were most excellent, as well as super nice guys. The singer even was a big Vibravoid fan, even though you don't really hear it in their music. Here we've got two tracks, a cool ambient mix of their very hypnotic and dark song "Skyscraper". This reminds me of Om but is more psychedelic and spacey and not that heavy. I like this track a lot, although it makes me a bit sleepy! The instrumental "Thickening Web" is the second Naam song and it's another rather slow, spacey and long piece that puts you in a trance. Can I hear some Pink Floyd influences on this one? White Hills give us an alternative, 11-minute version of their old experimental drone/space number "They've Got Blood... Like You've Got Blood" first released in 2005. It's great stuff but it seems to me that Dave never gives out his best tracks for split releases for some reason.

On the second LP there's some more energetic, rocking stoner stuff for a change. Italy's own Black Rainbows have proven to be a band to look out for, and their two previously unreleased songs really rock out. "Viper Tongue" is groovy, fuzzy stoner rock in the Fu Manchu vein and "The River, The Moon, The White Lake, The Megaelectrofantafuzzspace" gets more spacey and out-there with lots of guitar soloing and stuff. This instrumental is more like a jam than a proper song but I enjoy it a lot. Check out their split LP with Farflung, it's out of this world! I haven't really got it why The Flying Eyes from Baltimore, Maryland, USA have been so popular in Germany especially, since I have not found their albums that special. Having said that, the band seems to be getting better release by release, so maybe they've deserve it after all. Their first track here is called "Golden Grey" and is pretty okay, but unfortunately for me brings to mind some grunge bands from the 90s. "Evil Little Leslie" is far more interesting and has a cool, sinister, 60s garage styled creeping, bluesy vibe. They also lend from the blues classic "Spoonful" quite a lot, but who cares. The track starts to rock hard and fast later on which is nice.

All in all, this is a rather versatile  compilation and a good idea to to have two tracks by most bands instead of just one like your standard compilations. The Vol. 1 in the title seems to hint that there are more releases like this to come and I will be waiting...