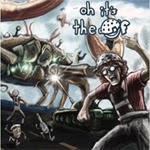 Okay, first of all: any band that wears home-made tin foil hats and even trousers live and has CD cover art depicting people fighting against giant crabs and other weird sea creatures etc. can’t be all bad. This is indeed very odd and psychedelic stuff. The Of is a band from Roslyn, Washington, and if the name of this tiny town rings any bells then yes, that’s where the TV show Northern Exposure was shot. Twin Peaks was also shot quite nearby at North Bend. You get the picture, I’m sure. This is the second CD released by the band this year so I guess they are quite a productive bunch. I’ve never heard of them before, though. But they really are somewhat whacky. The band is a brainchild of guitarist John Carey who has a pretty exciting playing style that sometimes brings to mind Frank Zappa (just listen to the long instrumental “Sodo Monkey Part II”). The other musician seem rather good at well, and the instrumentation includes keyboards, bass, banjo, mandolin, cello, percussion and drums and everyone expect the drummer also sings. According to John, their music “contains digested and regurgitated pop, avant-garde, rock, blues, jazz and other forms as well”, and I think he is right. With song titles like “Softbelly Crab Excerpt”, “Seagull Attack”, “Whiskey & Pills” and “Mystic Fishstick” you just can’t go wrong. There are 12 tracks on the 64-minute CD. Some of my favourites are the sort of Primus sounding “Seagull Attack”, the very weird and psychedelic, short “Can’t Stop Listening”, the rocking, fuzzy “You’re in Love with the Of” and the longest track on the CD, the over 14-minute, experimental trip “Mouse Trash “Recipe”. I get the feeling that anything could happen on The Off album and indeed almost anything does happen here… There’s some groovy Grateful Dead vibes there too (especially on “Mystic Fishstick”), but most of the album is very experimental, funny or just plain weird. The sound is pretty good considering that the album was recorded using very cheap gear. This is not the kind of music I feel like listening to everyday, but there certainly is a moment for this kind of weirdness for most of us. Check it out!