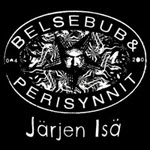 This is the first EP by Finnish band Belsebub & Perisynnit that was formed in 2011 in Lappeenranta. Their music is some kind of a combination of psychedelia, folk, punk and Finnish rock music. Sometimes it works pretty well, but sometimes it doesn’t. The band was first formed by the duo of Hra Luger (guitars, mouth organ, vocals) and Hän Sölo (bass). Then they took in a percussionist called Kosmodeus who plays cajón, djembe and tambourine. I think it’s good that they don’t have a full drum kit, since it gives their band some more character. Little bit later also violinist Jenni joined the band. There is definitely also uncredited synthesizer on this EP which is great. “Liukas Linda” opens up the disc with a bit weird, punky touch. The acoustic guitar and synthesizers give the some more air to this rather fast track. The melodic “Vuosia” sounds more like Finnish mainstream melancholic pop/rock. “Kuoleman kuuraketti” is more interesting stuff reminding me of Silun Veljet or Death Hawks. The repetitive “Illan viimeiset hitaat” has some Velvet Undergound and Kauko Röyhkä so it can’t be all bad, although the lyrics are very pessimistic. The EP ends with a long trip called “El Magico” that like completely form another plane. It builds up slowly with deep synth sound and hypnotic acoustic guitar while the violin adds a mysterious melody. The mantra-like vocals join in after about four minutes and they tell about some mystical magician who’s coming. Later on the track speeds up, but cools down into the slow and hypnotic going again. This is very psychedelic, I like this stuff! I hope the band writes more stuff like this and drops the funny mainstream clichés and lyrics about drinking too much booze.