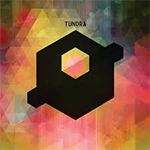 Despite their freezing name, Tundra is a trio from warm Venice, Italy. They have two bass players and a drummer, and are on a mission to make music that is not easily categorized. This is their debut album and it actually is quite hard to define or at least label their music, but it's instrumental, rather fuzzy,  heavy, progressive, rhythmical, technical and rocks. Some of the tracks on this  album also have post-rock vibes (like the nice opener "Shanti"), some are closer to progressive fuzz/stoner rock bands. There are also some bluesy, psychy moments (just listen to "Cinque", one of my favourites), and elements of straight-forward punk rock. This is pretty cool stuff, but not really that interesting or spectacular to my ears. I of course like to hear a lot of bass, though! As far as I can tell, the album is officially only out on vinyl which is cool.