Crystal Jacqueline - A Prayer for the Birds 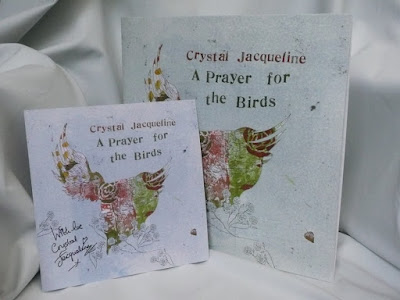 This is the fifth studio solo album that Crystal Jacqueline has released with his partner, song-writer, producer, guitarist etc. Icarus Peel. Then there are also the singles, the albums done with their full band The Honey Pot and various split releases with the two... And of course the rare live album! Together with some marvellous quest musicians they once again make magical, spellbounding and wonderful soundscapes that take you deep inside a dream. This time there are also some pretty hard rocking tunes included later on. Folk music lovers have no need to worry though, there are also soft, high-lifting and just amazingly beautiful acid/psych folk tracks in there like before.

The album starts off with the pretty, acoustic folk piece "The Edge Of My Garden". "White Horse Hill" continues in mostly acoustic mood, just superb. We also get some very nice percussion and solo guitar later on. "Dorsetshire Days" has a beutiful vibe and the new female background singers etc. make a difference as well. The melancholic and soft "100 Years Ago" has some great melodies. One of my favourites is the dreamy and magical "First Light". "Arise The Sun" is a darker, more rock oriented number that brings to mind some of the 60s psych rock legends, wow! "Mercy Row" is again a softer, hazy and hypnotic number, the title track a great, pagan inspired acid folk piece but then it's time to rock out. "Turn The Tide" reminds me of The Magic Mushroom band and some others I just can't get out of mind right now. There's some heavier, mind-blowing stuff later on... Loving it! Okay, time to chill out a moment again with "Moth" and then the finishing number "Bird Song" blissfully takes us on a journey. It is both a beautiful and rocking ride I tell you! An excellent way to finish the totally amazing album! There are only 300 copies pressed on vinyl and the 150 first to order also get an art print signed by Crystal Jacqueline so hurry up!