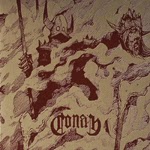 Conan is a crushingly heavy doom/sludge band from Liverpool, UK. I must confess that I’ve been a huge fan of Conan the Barbarian sword & sorcery books and comics since childhood and the author Robert E. Howard is one of my favourites. Conan is a perfect name for this band that’s so heavy and devastating that I’m sure their Cimmerian namesake would be proud of them. This trio has been releasing EP’s, split releases etc. since 2007, but Blood Eagle is their actual second full-length studio album following Monnos that was put out in 2012. One of their live appearance at Roadburn Festival was also released on 2LP last year as Mount Wrath: Live at Roadburn 2012. The band has also played in Finland, like at our Slip Inside This Club at Bar Loose in Helsinki in 2013 with Horse Latitudes. Tonight they are playing again at Bar Loose and I just can’t wait!

Okay, let’s get into the new record now. The 45-minute album features six new tracks ranging in length from just under fiver to almost ten minutes. It was recorded at SkyHammer Studio by Chris Fielding, and mastered by James Plotkin (Khanate, O.L.D.) with excellent results. The sound quality is really good and skull-crushingly heavy. I like the vocals since they are more like war cries or triumphant anthems than for example deathly growls or just harsh screaming that is pretty common with this kinds of heavy doom metal bands. There are also some psychedelic effects on the guitars from time to time to make things more interesting. Most of the stuff is slow and heavy, but they also throw in some hooks and a little faster parts which is cool. Otherwise things might get a bit boring after a while. Conan has been compared to bands like Eyehategod, Sunn o))) and Ahab, and there are definitely some similarities, while Conan still has something unique of their own. The long opener “Crown of Talons” is slow, gloomy and heavy stuff. The monotonous but highly effective vocals kick in after three minutes. It’s amazing how so simple stuff kicks ass so hard. “Total Conquest” starts off with some phased guitar which sounds cool. This one also has a bit more complicated and interesting rhythms and gets occasionally faster. The end riff reminds me of Celtic Frost which can never be a bad thing! One of the live highlights from the new album seems to be “Foehammer” that has more fierce energy than most of the band’s other tracks, although there are also slow doom parts, or course. This will get the people moshing for sure… Great! “Gravity Chasm” has cool doom boogie beat, and rocks hard too. Then we’ve got “Horns for Teeth” that is another killer track that sort of reminds me of early Celtic Frost or Hellhammer or even Dream Death but the sound is heavier and harsher, of course… Some very cool riffs on this one! The nine-minute “Altar of Grief” starts off with just a simple drum thing and bass. The guitar joins in after a minute or so, and things get extremely heavy and doomy. Phew! Later on there’s also some vocals. It’s good to have a slow and gloomy one to finish the record, I think, even though in the very end they rock a bit faster again. To sum it up: what we have here is a massively heavy, gloomy and loud album with no unnecessary gimmicks (or guitar solos) and it sure kicks ass. Go get the album and also be sure to catch the band live on their European tour right now since they play crushingly loud and truly maim!