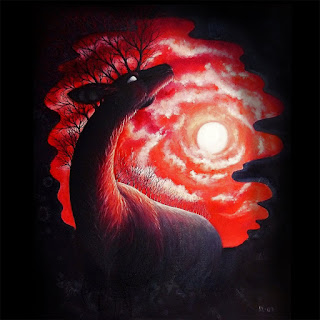 Iosomnia is the third album by Helsinki-based progressive heavy stoner/psych rock trio Jupiter. It follows the debut album Your Eccentric State Of Mind (CD only, 2014) and the second album Interstellar Chronodive (LP and tape, 2015). You can check my review of the previous one over here. The band has played live frequently and progressed a lot during the past years. Although you can still say it's the same band and hear some of the influences their style has matured to something of their own by now. At least for me it's pretty damn hard to name much bands that they sound like, but there are still some Kingston Wall vibes as well as similarities to some of the more progressive stoner rock acts like Causa Sui or Colour Haze. It all originates from the 60s and 70s, of course.

The new album was released on vinyl but the package also includes all the same music on CD in a clear plastic wallet. That's the way to release an album if you ask me! There are only four, long tracks that have a lot of different kind of stuff going on, so I guess it's safe to say that this is progressive rock. Some of it is still rather heavy, but not really metal in my opinion, more like stoner hard rock or something. Okay, the blast-beat part towards the end of the last track "Return to Zero" is metal I guess... The guys can now play and sing even better than before and they have also grown as song writers. The album sounds fantastic, as well, so it's very well produced. Even though there's so much different parts and vibes in one song it all flows easily through somehow making the album a very enjoyable experience as a whole. There are also some jazzy vibes in there, especially on the almost instrumental "Abyss Swallowed the Moon". The highlight for me still maybe is the bit esoteric "Quantic Being". After 40 minutes you realise you could have taken some more at the same setting! Luckily you can always play the album again and find something new every time. Check it out!