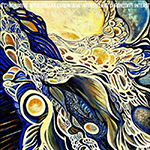 Jupiter is a young progressive & psychedelic hard/stoner/retro rock band from Finland. Interstellar Chronodive is their second album following 2014's Your Eccentric State of Mind CD and a split 7" with Centipede in 2013. I've sort of been keeping my third eye on them since the beginning and been happy with their progress. This album was first release on tape and then on vinyl a few months later in late 2015, so I'm a bit late with my review, but it took a while to get this LP.

The album starts off with "Stonetrooper". First we get some bluesy jamming, but before the three-minute-marker the heavy rocking begins, and soon the vocals join in. I often find the vocals the weak link in young bands like this, but now they are okay and in tune. There is a certain Black Sabbath vibe, but the music is more progressive and energetic and not really that doomy. Nice, long & groovy solo ending in this one! "Spirit of the Leech" is a tight and pretty heavy hard rock tune bringing to mind some of the millions of Swedish 70s styled hard rock bands out there. Again there's some hot guitar soloing and some nice, proggy jamming going on. The playing is very good on this album by all. On "Premonitions" the band cools down a bit at first, but then the rocking starts again. This is a heavy one, also including some cool, trippy jamming and soloing. The shortest track is "Dispersed Matter/Astral Portal" at 4:31. It's rather progressive, moody going that reminds me of Kingston Wall a bit. Not a bad thing, of course! "In Flux" is the longest track (14:08) and includes some cool, heavy & groovy 70s guitar riffing as well as a long, quiet, trippy & experimental end section. Great! The album is finished with the strong & heavy "Vantage Point" that is probably the best track on the album. Along with Kaleidobolt and a few others Jupiter is definitely one of the most promising young progressive stoner rock bands in Finland so be sure to check them out!