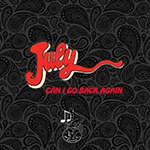 July is one of those late 60s British R & B/blues/psych bands that I have somehow missed listening to until now apart from a few songs on UK psych compilations. They released just one eponymous album and a few 7" singles in 1968 and the original pressing is very rare and unbelievably expensive (2.500£?!?) nowadays. You might have heard some of their songs like "The Way", "Friendly Man", "Dandelion Seeds" or "My Clown". The Second of July was released in the 90's including demos recorded before the first album, and finally the band made a comeback and started to play live shows in 2011 and released a new album Resurrection in 2013. What we have here, is the first 7" by the band since 1968 including an extended version of a song from the 2013 album as well as an unreleased demo version of the same track on B-side. Cool! "Can I Go Back Again" is a song that at first doesn't really sound all that special but slowly gets into your head and you suddenly realize how great it is. The demo version is not overtly different, but a nice addition to the fans to give a work-in-progress vibe. Now I feel like listening to some more July! As always, this 7" released in May will be highly limited so get your orders in right now.