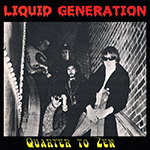 I've got to say I'm not the biggest fan of raw garage punk, but every now and then it's good to really get your blood running and adrenaline levels up with some good old, trashy, high-energy psych punk pounding. Liquid Generation was one of the first neo-psych rock bands from Seattle and only stayed together for about one year (1984). The band was very inspired by the 60s garage psych bands that were just making another round with compilations like Nuggets and Pebbles. They released just one 7" single in 1985 on Green Monkey Records with original songs "I Love You" and "1/4 to Zen" and then they were gone. They did how ever record some other tracks as well and play gigs with their repertoire mostly consisting of 60s garage psych covers.

This CD released in March compiles all (?) of their studio recordings and include 16 tracks in total. The recordings were made with 4 & 8 track analogue tape recorders and sound pretty raw but that just suits the music style perfectly. You could actually pretty easily think that this was recorded in some basement in the 60s! Most of the songs are rather fast and furious with almost screamed vocals, but there are a few exceptions. "1/4 to Zen" that starts off the CD is actually a pretty great tune, and it was penned by rhythm guitarist Bob Blackburn who started his garage rock career already in 1966 playing some mean Farfisa organ in a band called The Hardtimes. Some songs sound almost like The Misfits or The Ramones, so not really that psychedelic and more punk than garage rock. I like the fuzz guitar solos and the playing is actually pretty good by the whole band. The album ends with "Endless Summer", a pretty and more melodic and downbeat original by the singer Jeremy Meyer that also has some very nice organ. One of my favourites. This is wild, loud, raw, honest and energetic rocking and friends of garage punk really should check this album out.