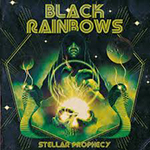 Black Rainbows, the heavy psych/stoner rock trio from Rome, just released their fifth album Stellar Prophecy and oh boy do they rock out. I was really impressed with their previous album Hawkdope they put out only last year, and the band continues to deliver the heavy psych goods within just one year. Like before, they mix together influences of early 70s hard rock, space rock and stoner rock to a great effect.

The new album includes seven tracks in 44 minutes. Fast, furious and hard rocking "Electrify" starts off the riot bringing to mind MC5 and Fu Manchu (especially the vocals). Fuzzy, wild and pounding stuff, perfect for drinking a few beers and letting out some steam. The slower "Woman" sounds like some long-forgotten bluesy heavy psych rock group from the late 60s/early 70s. We also get some Hammond to enhance the 70s vibe, nice! There's also a cool guitar solo in there. "Golden Window" is the longest track on the album at 11:39 and has also organ, synth, spoken word samples and trippy tape echoes to enhance the psychedelic, moody atmosphere. The track really starts after two minutes and I'm in heavy stoner rock heaven. I'm reminded of some early Monster Magnet stuff that I really love. What an amazing journey through space, time and mind! Then it's time for a short, straight-forward heavy rocker "Evil Snake" that seriously kicks ass. Some space sounds and Iron Maiden -styled guitar melodies are added for a good measure. "It's Time to Die" is a groovy 70s styled stoned hard rock piece, and on "Keep the Secret" the band gets even groovier not forgetting the cow bell and some more epic and floating parts will follow later on. Excellent! The album is finished with the long, spacey and lysergic "The Travel" and travel we must. What a great and trippy ending for a fine album, I love it! Don't miss this great release out on vinyl, CD and digital.