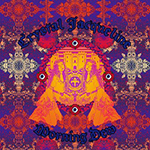 Crystal  Jacqueline (real name Jacqueline Bourne, I guess) is the beautiful-voiced singer of the UK neo-psych pop/rock/folk band The Honey Pot who recently released their amazing new album and single on Mega Dodo (check out my review over here). She has been busy with her partner and band mate Icarus Peel, and here's another excellent release by the duo. This limited 7" EP has four tracks, three of which are covers and one an original composition by Mr. Peel.

First we've got a great version of Bonnie Dobson's early 60s folk piece "Morning Dew". This song has previously been recorded by Lulu, The Grateful Dead, Jeff Beck, Lee Hazelwood, Nazareth and a lot of other folks, but somehow Crystal Jacqueline manages to make it sound as their own with a bit more pop-rock touch. Excellent, extended version, the track is perfect for Jacqueline's clear voice! "Ivy" is the shortest and only original on the EP, and more folky and fragile with acoustic guitar etc. I really like this beautiful little song! On the B side, there are two more treasures to be found. "Moonsong: Pelog" is originally by Joe Byrd and the Field Hippies and released on their 1969 album The American Metaphysical Circus. I don't remember ever hearing this brilliant song before, I must confess in shame... It's just brilliant, mellow psych folk/rock masterpiece! Crystal Jacqueline's version does a great homage, totally wonderful, dreamy and trippy stuff. Finally, they cover another early 60s song by The Jaynettes: "Sally Go Round the Roses". I've never heard this song before either, but it sounds very pretty and different and grows towards the end. Get this superb EP as soon as you can!