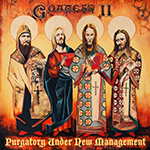 Goatess is a Swedish stoner doom metal band fronted by Chritus Linderson (ex-Count Raven, ex-Terra Firma, ex-Saint Vitus) who's also the singer in international doom metal group Lord Vicar. The band released their first album in 2013 on CD and double vinyl, and after some hard times recorded this new album in 2015. I really liked their debut, but this time the band has come up with something much more psychedelic, interesting and mind-blowing. The slow, doomy, heavy and hypnotic riffs and very Ozzy-like, powerful vocals of Chritus are still in the main focus, but now there is much more variation in guitar effects and moods and there are also some samples and synthesizers to give the album a fresh, atmospheric twist. The production is top-notch for this kind of heavy stoner stuff.

The almost eleven-minute "Moth to Flame" starts off the album in a great, doomy manner also having some more atmospheric parts. The title track "Purgatory Under New Management" has s cool spoken sample at the beginning, and then the slow, heavy riffing in the Saint Vitus style begins. Again, we also get a lighter, dreamy and psychedelic section in the middle as well. What a great track! "Murphy Was an Optimist" is a very heavy doom metal song that also has some lead guitar work. I'd still like to hear some more ripping guitar solos, but apparently this is not what Goatess is about. "Crocodilians and Other Creepy Crawling Shhh..." has some swampy sound effects and spoken word samples and yes, it's another slow and mesmerizing stoner doom piece, but this time without vocals and with some very cool & trippy guitar layers. The mid-tempo"Shadowland" rocks a bit more in the Black Sabbath/Trouble vein and it's another killer song. Also "Silent War" brings to mind Black Sabbath a bit and there's some groovy wah wah guitar on this one, and some solo guitar as well. Cool! One of my absolute favourites is the deep and amazing "Wrath of God", that has some excellent synth stuff and a really out-of-this-world vibe. Brilliant! I also really like the last, mid-tempo song "Good Morning" that somehow reminds me of The Obsessed. Some lead guitar in here as well, and very nice riffs! All in all, if Purgatory is now managed by Goatess, I will have no problem staying there a few aeons, since these guys definitely know what they are doing and they do it right. The release date for this album is April the 15th for CD and digital and June the 3rd for the 2LP, pre-order now. Also make sure you go to see Goatess live when you can because they kick ass.