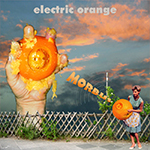 I’ve been a big fan of the German kraut/psych/space rock band Electric Orange since Delerium released their Orange Commutation CD in the mid 90’s. I'm happy they got soon over the electro/techno style that they had on a couple of CD's released in late 90s/early 00s that still were excellent. All their later albums have been superb spacey krautrock including experiment stuff  and many long improvisations. I was also lucky too see tham live at Roadburn Festival in 2008!

Originally released in 2007 on CD only, Morbus was their best and most coherent work at that point. The band had a steady line-up and their sound was better and bigger than before. Morbus is close to 80 minutes long, but there are no fillers, just pure cosmic, hypnotic, psychedelic bliss all over the place. Organs and synthesisers have always played an important role in their sound, and they are of course still there, but now many of the 12 tracks also include vocals or narration. There are also female backing singers, Mellotrons and flute to give the album a celestial feel at points. Some of the tracks are also pretty heavy, which is great. ”Flohfunknest” is a bit groovier, jazzy track but still psychedelic. I love their way of composing the tracks in the studio while recording, but on this album some of the tracks really sound they were pretty well constructed. One of their advantages is having their own studio where they can use just as much time as they want and use old gear from the 70’s with new recording technology. So the vibe is very groovy and psychedelic and the sound quality top-notch!

It’s really hard to pick any highlights from this album since I really like all the tracks, so let’s just say that ”Krautschock” reminds me of Brainticket, Ash Ra Temple and Cosmic Jokers and that ”Wald” turns into superb, hypnotic, energetic space rock after two minutes... Plus that ”Sarau” is a very effective deep-trance machine and that ”Reaching” sounds it was played by some stoned angels in 1968... The early Pink Floyd feel is also still there. I'm grateful to Adansonia Records for finally putting this album out on double vinyl /like Krautrock from Hell and Netto Before, not forgetting the brand-new groovy 10" last year) and the most limited edition is really something special with cool poster, incense sticks and "Electric Orange" branded wood-made holder for the incense sticks. The track list is the same as on original CD but some of the tracks are in different order to better fit them on the four vinyl sides. A must have for all vinyl psych/kraut/space heads!