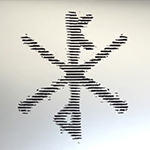 These Finnish experimental krautrock/electronic/IDM heroes released their fourth album last month, so I'm a bit late again. Maybe I'm just having difficulties in reviewing their stuff, since this group  really is a pretty unique entity altogether. K stands for Timo Kaukolampi (electronics & vocals, ex-Dun-delion, Ex-Larry and the Lefthanded, ex-Op:l Bastards, you name it...), P for Tuomo Puranen (bass, keyboards, ex-The Elevators, ex-Op:l Bastards etc.) and X for the "mystery" drummer, usually Tomi Leppänen (Aavikko, Circle, Pharaoh Overlord etc.) and/or Anssi Nykänen (one of the most famous and talented Finnish session drummers since the 80s). They often also have some guests both in the the studio and in live environment. I must say that I usually enjoy their mysterious, energetic, ecstatic, empowering and cult like live performances more than their albums. They have the power to drive the audience wild and dance like crazy. Having said that, their studio output is also excellent, maybe apart from their Easy 12" EP released in 2011 that I find a bit dull. Just my opinion, of course... These guys have tons of creativity and talent, and it sure shows in their music.

III Part 2 starts off with the atmospheric, uplifting "Winner" that works out great as an introduction to the hypnotic, motorik and electronic mayhem that follows. "Freeway" is probably the "hit song" of the album and also one of my favourites. After about 50 seconds of quiet synth drone the fast, driving krautrock beat begins, and when the great vocals join in, I'm in sonic heaven. Lasse Savola is playing a bit of guitar as well. This is a very simple but totally brilliant track that works like magic. "To Believe" has some hypnotic, tight caveman vibes that always works for me. This song also has some female backing vocals, and great synth melodies. I think I'm having some Joy Division flashbacks as well? "Sub Goblin" is a mid-tempo, rhythmical instrumental with weird sequencer stuff and a groovy bass line. The orchestrated chord progression towards the end is very powerful... The longest track on the album is "Siren" and this is at first more ambient, experimental stuff and also sounds very orchestrated. This would be suitable for a soundtrack to some art film about the nature of Iceland, for example. Okay, the beat and vocals begin soon enough bringing in a very danceable vibe, but there is still this pompous, harmonic orchestral element in there from time to time. This track also features Alexandra Babitzin and Paula Vesala on vocals but I don't hear them that much. Some great melodies on this one, sounds like something that you could almost expect to hear on radio. The vocals are giving me some U2 vibes around the 5-minute-marker, but it still works... "Air Burial" starts off in a rather ambient way, but shortly after one minute the VERY fast beat begins, and this almost sounds like some modern space rock band just without the heavy guitar! Seriously, this rocks. Wonderful! Definitely one of the highlights for me. The album is finished with the minimal, synth-driven ambient instrumental "Transuranic Heavy Elements" that is a perfect sedative after your endorphin, serotonin and dopamine levels have been pumped up during the ride. I'd say III Part 2 is K-X-P's best release to date, check it out. The band will play their record release party next Wednesday (4.5.2016) at Bar Loose, Helsinki, take part in the ritual if you can.