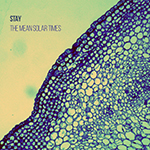 The Mean Solar Times is the sixth album by Spanish psychedelic indie rock/pop group Stay. Once again, I must thank Fruits de Mer Records for introducing this band to me when they released Stay's first vinyl 7" single with some cool cover songs in 2008. Their original stuff is rather influenced by psych infused 90's indie Brit pop/rock groups, or that's what it sounds to me at least. Oasis, The Verve and a few others come to mind, but in  a very positive way! I'm also reminded of their  Italian counterpart, the neo-psychedelia band Strange Flowers and especially UK psych revivalists The Chemistry Set. Their music is very melodic and catchy, the great vocals have nice harmonies, the rhythms are often groovy and make you want to dance. The guitar work is great and not too heavy although the solos can get a bit wild at times, plus they use different organs, piano and some synths as well. They are not overtly psychedelic, but when they add some sitar to some of the songs I can see some colours... This is the kind of music that I would at least hope you could hear on the radio, I just never even bother to try.

The Mean Solar Times is only released on vinyl and digital formats (no CD) and includes 11 songs in 52 minutes, and if you buy the LP you'll also get a download code. As always, the most psychedelic songs are my favourites, but even the more pop-like, accessible songs are very good, since the band has such a great sense of melody and composition. I can hear some 60s influences in there as well (The Beatles, The Byrds, The Stones...), but the music has a rather modern (90's and onward) vibe. Just like the title suggests, the groovy "Mind-blowing" as well as "I'm Away" both have loads of sitar and are perhaps the most psychedelic tracks and hence the latter is the one I have used in my Astral Visions Psych Mix. Some of the slower, more emotional songs also remind me of The Soundtrack of Our Lives, so if you are a TSOOL fan you should also check out Stay. The album is very well produced as well and sounds excellent so what are you waiting for?