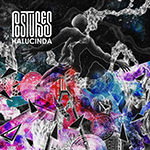 I sort of liked the first album by Swedish band Postures released in 2013. Some of the tracks were pretty psychedelic and cool. Now, three years later, they return with a new album and a bit new style as well. They have adopted a more metallic, progressive sound. Without the female vocalist with soft but powerful voice (who's great, by the way!) they remind me a bit of some of the prog metal bands like Dream Theater and that's not really what I'm interested in. Of course there are some softer, more atmospheric parts like the beautiful, semi-acoustic "Every Room", but most of the stuff is rather hectic, progressive and heavy. There are also still some psychedelic vibes at times, but not that much. I guess fans of Katatonia would also like some of the slower, more emotional stuff, especially the final track "In the Dark". Okay, so this is not exactly my kind of music, but I got to say that the talented band can play and sing and the songs are well crafted and rather interesting.