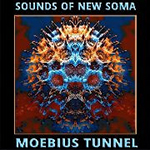 Moebius Tunnel is the second album by German cosmic/ambient/psych/electronic/kraut duo Sounds of New Soma. I really liked their 2014 debut Beyond the Acid Dream that was also released on the excellent Tonzonen Records in a tiny edition of just 300 copies. On Moebius Tunnel the duo just takes their soothing, spacey and highly psychoactive aural visions even further. Sounds of New Soma is formed by Alexander Djelassi (guitar, bass, synthesizer, effects, vocals) and Dirk Raupach (synthesizer, effects, vocals) and these guys really know how to make your mind float. Again, this is a highly limited edition of just 300 copies on vinyl, 50 of which come in an oversized, personalized box including lots of cool extra stuff... I just had to order that, of course! The vinyl version includes five long tracks, and the CD version has one bonus track called "Neuland". There are no vocals as such, just some quiet, spacey/robotic narration in the background at times.

The first two tracks ("Lysergdelfin" and "Kosmonautenglück") are very chilled-out, dreamy and ambient in nature without any rhythm. The new Soma really seems to be working... The narcotic "Subraumverzerrung" also has a slow, hypnotic beat and bass and really takes you somewhere out there, although it stays relatively minimal. "Stech/Apfel" is a more ambient, relaxing mix of soundscapes again and I really enjoy the flight. The longest track is "Morgengebet" at 11:42 and the sequencers remind me of Tangerine Dream a bit as well as some of other old Berlin School masters. A mesmerizing electronic beat is added as well, and this is a highly hypnotic and heady piece alright. The CD bonus track "Neuland" is very laid-back and relaxing spacey ambient stuff and makes your mind wander in wonderful, strange places. All in all, this is exactly the kind of music that works the best while you put on your headphones, lay back, close your eyes and travel in the astral plane. Amazing and warmly recommended for all astral travelers!