Maat Lander - Dissolved in the Universe 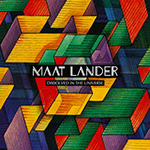 Maat Lander is a Russian instrumental space/psych/cosmic/experimental band formed by musicians who also play in other bands like Re-Stoned and Vespero. They released their first CD The Birth Of Maat's Galaxy last year on R.A.I.G. Records, but I never got a copy of that. This new album was released this January on vinyl by the excellent Clostridium Records, and includes some of the best pieces from the debut CD plus two new, unreleased tracks. Maat Lander's rather peaceful and ambient music is improvised live in studio, and is quite minimal and floating. Their instrumentation includes guitar, loops, bass, synths & drums.

Dissolved in the Universe starts off with the around four-minute "Intro" that's just synths and soaring, effected guitar. "The Comet Rider" has at first a cool, spacey and cosmic vibe with some sequencer and nice synthesizer melodies, and then it bursts into Ozric Tentacles, sort of jazzy groove with great solo guitar work. Very nice! The longest track on the album is "To Johannes Kepler" at 10:54 and it's a spacey, floating and psychedelic mind journey that puts you in a trance-like state. This does bring to mind some of the more electronic/ambient krautrock masters... "Aquarius" is another lengthy track and begins with some moody, beautiful guitar and tiny space sounds. Soon we get some hypnotic sequences and the steady, energetic drum beat joins in. Again there's lots of great solo guitar work and a cool groove and some more Ozrics vibes. "Alnilam" is a laid-back, mystical and sort of Eastern sounding piece that I really like, and the last track "Space Scum" rocks hard and fast. A very nice eruption of energy for the end! Check this band out if you are into improvised space rock and floating cosmic atmospheres.