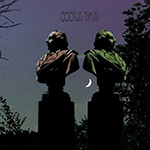 Hollow Ghost / Rochelle Salt is the fourth full-length album by Finnish psych rock/pop/folk group Octopus Syng lead by singer/guitarist/multi-instrumentalist Jaire Pätäri who started the band as a solo project in 1999. As always, the making of this album has been quite a hard job including some major problems, but then again, you can seldom achieve anything great without hardships and sacrifices. At first, Jaire was planning to make two separate 10" EP's with different themes and styles, but it turned out the music worked better as a whole, after all. Well, at least it only took around two years to release a new album instead of seven like the last time! Jaire, who still writes all the songs, has been listening to a lot of chanson and musique concreté and deepening his obsessions with ancient microphones, Paris and old ghost stories. This time the influences go further back in time even to the 1920s and 1930s, but I'm sure people will still compare this to Syd Barrett's Pink Floyd... Which of course is still partly valid! You can still find melodic, sunny & catchy psych pop tunes on the album, but there are also more ghostly, eerie and experimental stuff in there.

Just like before, there are 11 songs on the album. Another must for a Octopus Syng album is an instrumental, weird intro, and "Carbon Dust And Latin Romances 1927" really is exactly that making you go all goose bumps. "Woman" is a pretty, romantic and melancholic ballad sounding it was recorded around 1960. One of my favourites is the more up-beat and positive "Echoes from the Past Centuries" that has some great melodies and works really well. I love the vintage organs that Jaire uses. "Surrealistic Room" is another highlight and a superb song the band has been playing like for some time now. One of the most psychedelic rock moments on the album, and again the melodies are sublime. "My typewriter is singing...". Then it's time to cool down again with the beautiful and fantastic "Lady Florette". "Melancholy of Delight" is another marvelous, a bit odd, laid-back song and the longest on the album at 5:14. On "Belle And Ville" you can most clearly hear the chanson influences, quite nice! "Unknown Actress" is closer to Syd and Pink Floyd I guess, although it has a waltz beat on the verses... What an amazing song once again! "Today's Portrait" is the most minimal song on the album and very fragile and tender and has very personal lyrics. "Walking in the Pale Light" is another slow and highly emotional song with a very enchanting, deep vibe. Excellent! Octopus Syng must be the only band that I know who have released an album with a title of their following single and NOT include the song on the album and then release it on the next album as a different version. That's what they did with "Reverberating Garden Numeber Seven" that finishes off this album in an amazing way. No wait, there's also a third version as a video on YouTube! That's what I call weird and psychedelic. Confused? Never mind, just get this highly limited album on vinyl and/or CD and get inside the wonderful world of Octopus Syng. The album will be released 29 July and you can pre-order it right away.