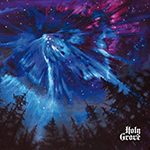 This album released in March is the debut of Portland, Oregon based heavy stoner doom band Holy Grove. I had never heard of this group before, but they seem to be friends with bands like Witch Mountain, Ancient Warlocks, Sons of Huns, Mos Generator, Lord Dying etc. and I guess their music inspired at least by Black Sabbath and Pentagram is mostly in similar vein. Their music is melodic enough and has cool hooks to make things a bit more interesting. The vocals are clean but powerful, just the way I prefer in this kind of music instead of more screaming or growling. Many riffs are like straight out of the Saint Iommi's riff book but that's okay. I also get some grunge vibes (Soundgarden, Pearl Jam) that I'm not totally happy with, but the sound is heavier all the time, of course. Most of the songs are rather slow or mid-tempo, but "Caravan" rock a bit faster (think of Trouble "fast"). Also the longest track "Hanged Man" has some more energetic stuff (as well as some killer solo guitar work), and the same goes for the guitar solo part of the last track "Safe Return", that sort of sounds more like 70s hard rock (Led Zeppelin?). Personally, I don't think that Holy Grove really have anything special to offer that we have not heard before, but what they do, they do well. This kind of music just doesn't interest me that much.