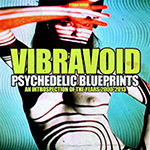 Let's make it clear right away: Vibravoid from Düsseldorf, Germany, is one of the best and most important psych rock bands during this millennium and in my top five band list ever. I've been a fan since the first album came out and love them more and more every year. The leader Christian (guitar, vocals etc.) always delivers the most mind-blowing & grooviest stuff on the planet, and the band's whole discography is pure psychedelic bliss. It's sort of strange that there has been no "best of" type compilation available before, but now this has finally been fixed with Psychedelic Blueprints CD that is an introspection of the years 2000 - 2013. There are of course so many superb Vibravoid songs out there that it would be virtually impossible to collect all the best on one CD, but this is as good an effort as it gets. As always with Vibravoid reissues, the tracks are not exactly the same as on original releases but have been partly re-recorded and remixed, so even if you have all the original stuff you'll get something new which is very cool! I'm not going to go through all the tracks here since most of you already know these masterpieces. Let's just say that there are 13 tracks on this CD and the focus is on the bit shorter, groovy and up-beat tracks apart from three longer ones. This is the perfect disc to all the Vibravoid novices to get them start tripping to the Vibravoid sound, and a very useful compilation for experienced fans as well to maybe play in your car or where ever. There are absolutely no fillers in here, just pure mind-expansion and space rocking. Just look at this track list and drool:

The CD will be released next week and you can pre-order it form the Stoned Karma website over here. There's also a new studio album Wake Up Before You Die as well as a massive 6CD live album coming up later this year, and the Finnish fans will have several opportunities to see the band alive again but more of that later...