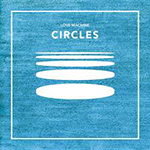 Love Machine is a German psych/classic rock quintet from the Düsseldorf/Köln area. I reviewed their debut album A Present form the Galaxy some time ago. It didn’t take too long for the band to produce their sophomore effort, so here’s Circles. They follow the 60s/70s influenced style of the debut, and I can still hear quite a lot of echoes of The Doors/West Coast psych/classic rock as well as prog in their sound. Their music is not overtly trippy and most of the songs are pretty well structured and melodic, although some of them have longer solo/jam sections.

Circles includes seven songs that range from little bit over four to almost eleven minutes in length. The sunny and positive “Sun Paradox” starts off the album in a nice way. The song reminds me of Finnish psych group Octopus Syng apart from the deep vocals that are closer to Jim Morrison. “Maze” is another cool little psych/prog rock song that sounds a bit like Jefferson Airplane maybe (again apart from the vocals, of course!). “Rotation of Earth and Love” brings to mind The Doors a bit more, very 60s vibe. I like the more psychedelic middle part! The title track “Circles” is slower and more ballad-like, until the faster, Santana styled long solo part begins. Not bad at all! “Starship Traffic” again strangely reminds me of Octopus Syng, I guess they have been listening to same bands… Some cool analogue synths on this one as well. “Gravity” is a longer (8:07), slow and dreamy track and I’m getting some Johnny Cash vibes from the singer here. There is also a peaceful, instrumental synth part in there that I enjoy and some atmospheric solo guitar work. The last track “In Search of Time” is the longest on the album at 10:44, and this one somehow brings to mind Spirit and The Grateful Dead. There’s also some sax in the mix which is nice. I like the long, psychedelic jamming part on this one! This is a very cool album that you should check out if you enjoy the modern adaptation of the late 60s/early 70s US West Coast vibe with some original spices thrown in for good measure. Available on limited vinyl, CD and download.