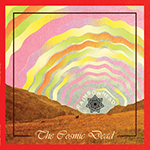 The Cosmic Dead from Glasgow, Scotland are one of the most important bands in the psych/space/krautrock revival that we have witnessed during the last five years or so. I've been a big fan of theirs ever since they sent me their first album for a review in 2011 on CD-R. I just had to buy the tape later on and the first 2LP version in 2013 on Cardinal Fuzz as well, and have been doing my best to get everything that they have put out ever since, and they have been pretty busy and productive. I have also been lucky enough to catch them live a couple of times (Roadburn and Liverpool Psych Fest) and they really blow your mind in a live setting. I adore their combination of heavy, punky Hawkwind styled space rocking, wild jamming, weird psychedelic effects and hypnotic, motorik kraut beats. Even a 30-minute track maintains your interest and just takes you on a superb mind-journey.

Rainbowhead is the band's latest full-length and was released in March (vinyl on Blackest Rainbow, CD on Paradigms Recordings), so I'm a bit late with my review, but I only recently received the promo download. I somehow missed the preorder of the more limited edition of the vinyl on very cool looking cream and green swirl vinyl (only 200), but there was a nice edition of the coke bottle clear vinyl (900 made) with a exclusive jam CD-r (only 100 copies) that I was able to get from their local record shop Monorail. You got to be fast and loaded with money nowadays to get all the nice psych rock gems out there!

This time the quartet delivers four brain-frying space jams. They are famous for side-long trippy blasts, but this time they start off with a couple of shorter ones. "Human Sausage" is a fast and furious beast that penetrates you skull like a lightning bolt and makes you tremble and shake like a madman. Later on the track gets more krautrocky and the synths take a more prominent role. Excellent! "Skye Burial" is a three-minute cosmic ambient track and sounds very good and soothing. The A side ends with the 13-minute "Inner C" that rocks out again and in a very hypnotic manner. I love the way the band plays the same thing over and over and adds little things and changes and puts you in a trance. Wow! The 18-minute title track takes the whole B side and is at first a bit slower mind-fuck that includes some wild, experimental guitar freak-outs in the AMT style even. And of course the boys just can't stop themselves for adding speed on their way... The guitar melodies towards the end sort of bring to mind Hills from Sweden, another excellent current band, by the way! At the moment I feel like this is probably the best Cosmic Dead album yet, although I might say that every time so... Anyway, this sure kicks some cosmic ass, just get it. There is now a second pressing available from Bear Tree Records.