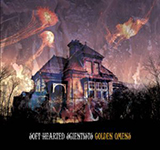 The Soft Hearted Scientists is one of MANY great bands that I have found through Fruits de Mer Records and definitely one of the most interesting as well. This double CD is the 7th album by this Cardiff-based psych rock/folk outfit and recorded mostly at home like some of their earlier stuff. There is a warm, home-baked feel on the album, but the sound and overall production is still great and professional. The album is divided into four parts and lasts for a little over one hour, so it would have fitted on one CD but there must be an explanation for it to be a double CD. Maybe they want the listener to stop for a while in the middle?

There are 26 tracks in total (well, 27 on the back cover but...where is "From Broken Glass"?), so average track length is pretty short. There are lots of little instrumental interludes, and just like before, all the little pieces form a nicely flowing whole. The lyrics are very important in the great songs that at first seem very simple. Only after listening to the album many times you realize how well-crafted and clever the music really is. The instrumentation includes electric and acoustic guitars, kitchen sink percussion, vintage keyboards and weird, psychedelic effects, and I really enjoy the vocals. I'm having difficulties in finding anything that sounds like the Soft Hearted Scientists, but they must have been listening to Syd's Pink Floyd to get so whimsical, late 60s/early 70s UK acid folk for the beautiful/spooky acoustic vibes, Robyn Hitchcock for the 80s alternative/indie ingredients etc. and there are lots of pop elements, electronic beats and even some surf & country stuff in there as well as nature sounds and other samples. I also really like the cover art made by one of the band members but I don't like this kind of cardboard cover where you have to get the CD's out from the very tight openings in the inside as it's almost impossible with my big fat fingers to do that without damaging the discs and the cover. Oh well, I guess patience is as important here as getting deep into to wonderful sonic world of the Soft Hearted Scientists. There's a highly limited (just 100 copies!) special edition with a poster available from the band's website right now so go and get it! The official release date is 8th July.