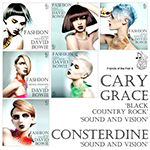 Oops, I'm a bit late again, sorry about that... Anyway, this promo package from Keith at Fruits de Mer got the full attention of Finnish customs because, in the normal fishy, wacky manner, it also included a couple of sachets of Crazy Candy Factory popping candy to put in your mind for an authentic vinyl clicks and pops while listening to the promo CD... Not sure if there were more that the custom officers have tested/tasted, but two pouches were left when the letter finally arrived. Okay, what else do we have here? It's a promo CD-r in cardboard cover featuring three tracks from a very limited (50 copies only!) 8" lathe-cut single only to be sold at Games for May event that was going on last Sunday in London. I've heard it was a blast!

It might seem a bit pointless to review an ultra rare single that you might never be able to get now after the event, but who cares. So, let's concentrate on the music for a while. Those who have been buying all (or at least most) of the Fruits de Mer related stuff have been receiving some extra stuff at least once a year, and last year's freebie was a compilation CD-r of cover tracks by David Bowie called Fashion. This lathe-cut starts with one track from that compilation: "Black Country Rock" performed by Cary Grace, a songwriter/composer, producer, musician, and analogue synthesizer maker based in the UK. Cool, groovy stuff, and it's very nice to hear a Bowie song sung by a talented woman! I also particularly enjoy the analogue synthesizers on this one. Cary also offers a new version of Bowie track "Sound and Vision" on the B side, not one of my favourite Bowie tracks to be honest but still a very good version with the synths again. Finally, there's also Consterdine's a bit more chilled out instrumental take (from the Fasion CD-r) of the same track to end the 8". This is a very nice item, I can only hope to get the actual 8" some day without paying a month's rent on eBay.

By the way, the next Fruits de Mer related festival 14th Dream of Dr. Sardonicus in Cardigan, Wales will take place on August 5-7, get your tickets from over here!