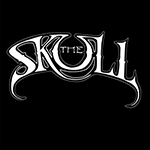 The Skull started as old Trouble members decided to start playing the early material by this original traditional doom metal band live a few years ago. Finally they also decided to write some new material. This single was originally released only on CD in 2014 and now sees the light of day on vinyl for the first time thanks to Svart Records.

Along with Pentagram and Candlemass, Trouble has been one of the most important doom metal bands from me since the mid 80s, so I was naturally interested in this project. It's good to hear that "Sometime Yesterday Mourning" is great old school doom bringing to mind the first Trouble album, although it maybe has a bit more melody. The heavy guitar sound is pretty much the same, and Eric Wagner's vocals work out very well. Great stuff! I'm even more excited about the B side that is an old trouble classic "The Last Judgement" originally released on a Metal Blade compilation LP before the debut. The riffs are heavy as hell and Eric Wagner's shrieking vocals are perfect for the vibe. I've always loved this song and it sounds really good now as well. I sort of lost interest in Trouble after the same-titled album in 1990, but you just can't beat these old-time doom vibes this single offers... Now I just need to get The Skull's album and brand-new single as well!


(The video actually starts off with "The Last Judgement".)
Lähettänyt Dj Astro klo 10.07