The Band Whose Name Is a Symbol - S/T 3LP Box 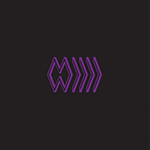 The Band Whose Name Is a Symbol is a cool Canadian instrumental and experimental psych/kraut/psych/space/punk rock band that was formed in 2008 but has only recently been introduced to Europe and the U.K. by the great Cardinal Fuzz and Drone Rock Records in the U.K. I only heard of them when their latest album Masters of the Molehill was released last year, check out my review here.

They have a full, a bit raw and lo-fi sound made with guitars, bass, drums, electronics, keyboards etc. and often bring to mind some of the psychedelic forefathers like Hawkwind, Guru Guru, Amon Düül II etc., but blend perfectly with the modern underground psych rock boom. They have released quite a lot of vinyl albums on their own Birdman Sound Records, but in tiny quantities like 100 or even 40 copies. Three of those albums (Versus the Purveyors of Conspicuous Authenticity 2010, Scrappy Little Jaw 2013 and Pathfinder 2014) were just recently released in a nice foil stamped box with covers and inserts but again, only 148 copies were made available which meant that even I didn't preorder a copy in time... So why write a review based on a digital promo of a already sold-out, very rare item? Well, just because I really dig this band and appreciate what Cardinal Fuzz is doing! Also, small numbers of these reissue LP's are available individually. I'm not going to go through all the tracks separately since there are twenty of them and you can hear them all at the band's Bandcamp site. Most of the tracks sound pretty much improvised and usually have some heavy (sometimes even metal) guitar and a rocking, sort of deranged, acid punky attitude not unlike ST 37, but there are also more relaxed, dreamy tracks as well as more experimental, avant garde stuff. I seem to prefer the more motorik, krautrock-like pieces. If you are into heavy, raw, weird and psyched-out instrumental rock music you definitely should check this band out!