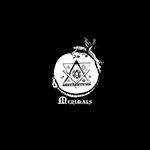 "Experimenting the psychotropic properties of sound and exploring the power of the Elements in relation to the Platonic solids influenced by the Monomyth." That's how this mysterious Italian/American four-piece describes themselves and I'd say it's as good a description as any for their ethereal, atmospheric, psychedelic, dreamy, dark, weird and deep music. This very limited debut vinyl was released already in April, so I'm terribly late again with my review, but it's still available from some sources so better late than never.

It's quite hard for me to say what music style this band with exquisite vocals belongs into.  Sometimes they sound like a non-electronic, more acoustic/rock version of Massive Attack, there are some post-rock vibes, and a certain occult overtone for sure. All the five tracks are excellent. The album starts off with the slow, hypnotic, rather minimal and somehow creepy "In This Unforgiving Heat" that also has some mystical, Oriental vibes. The almost whispered vocals start after the middle, and I'm spellbound. "Dodecahedron, The Window Sphere" starts off slowly and in a dark, magical mode. It speeds up along the way but cools down at the end again. Mesmerizing stuff! "Tetrahedron" is the most beautiful, tranquil and dreamy song and perhaps my favourite. The piece grows a bit like GSY!BE and gets very powerful towards the end. Wow! "Transition From a Cube to the Octahedron" is another slow, very impressive song that transports the listener for ten minutes into some other, weird dream reality. The most hallucinatory track still is the last piece "Bird on the Wing as a Hinge" that's more like deep, dark ambient soundscapes with hypnotic, whispered occult vocals. Another highlight for sure and very trippy! Check out this band and try to get a copy of their LP before it's gone forever.