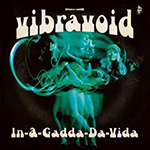 Europe's leading psychedelic acid rock band Vibravoid has been playing Iron Butterfly's lengthy hard rocking 1968 hit song "In-A-Gadda-da-Vida" live for some time now and also released their live version on Loudness for the Masses 2LP last year. With their psychedelic groove, mind-bending sound effects, druggy vocals, mind-warping guitar and talented, authentic 60s sounding organ player the track is somewhat perfect for Vibravoid to cover. In August they will also release this heavy psych monster on a limited seven-inch single as a studio version! The track has been edited down to "just" ten minutes and divided as Part 1 and Part 2 for two sides of the single. But don't worry, there's even a short drum solo in there finishing Part 1 as well as psychedelic jamming so the vibe is intact! The sound is totally amazing and you just can't help grooving to these catchy melodies and punchy rhythms. I'm in love! Get this single fast or you will miss out on a real gem.