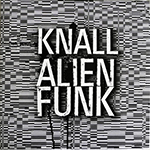 Knall is a German band playing instrumental, psychedelic, groovy and funky krautrock. They have released two studio vinyl albums (the second one a 2LP) last year on Krauted Minds and Tonzonen but I somehow missed those. Their third album Alienfunk is a live album recorded at Monsters of Krautrock Festival in Würtzberg, Germany. Apparently also their studio albums are recorded in one take without overdubs and in a very inspirational mode and the sound quality is great here as well so there might not be that much difference. This one is also available on CD, as well as two different, limited double vinyl editions.

I'm having a little trouble trying to think of some similar bands to Knall, but probably Guru Guru is the closest I can come up with. This is not overtly psychedelic and not really spacey either, but has a cool groove and often tends to be rather repetitive and hypnotic, but definitely not in the motorik Neu! way. Maybe there's some Can in there as well. The rather distorted guitar sounds rather 80s on 90s and the two bass players (one with lots of effects) give the band an unique flavor. All the guys are great players and play together really way. I'm not sure, but all of this might be improvised, and if so, well done! The tracks are all long (6:46 - 17:38) and rather experimental and weird. The title of the album is pretty suitable as there's a certain alien quality to the jams and there for sure also is some funky parts in there. My favourite is probably the last track "Epilogue" that rocks out in an energetic mode and makes you want to dance. I'm sure this band works best experienced live and out of your head in some modern hippie festival, I hope I will get the chance one day!