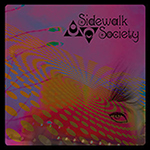 Although originating from sunny California, Sidewalk Society certainly seems to be obsessed with 60s UK psych. They have previously released one digital album and one album on vinyl and CD with all original tracks as well as one cover 7" on Fruits de Mer and taken part in several FdM cover compilations as well. This four-track 7" EP that will be released next month features two songs penned by young David Bowie, one of this power trio's greatest heroes, and two by The Action. For your information, the tracks were recorded way before our Star Bowie faded away from this plane. "Can't Help Thinking About Me" was originally released on a single by David Bowie with The Lower Third in 1965. It's a great, energetic early mod/freak beat track that sounds quite a lot like The Who, and Sidewalk Society do a great job on it. Their version was previously released on the rare "members-only" Bowie compilation on Fruits de Mer. "Look at the View" by The Action is a bit more cheerful and happy, not bad at all. "Let Me Sleep Besides You" (single track from 1967) is an atmospheric mid-tempo pop track that somehow brings to mind The Moody Blues. Well done, once again. The EP is finished with "Strange Roads", another The Action mod/psych tune that also works splendidly. So in summary, this one is a must for Bowie fanatics and Fruits de Mer collectors alike!