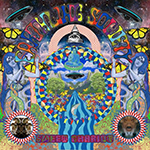 U.K. psychedelic torch-bearers Earthling Society should be familiar to all Astral Zone readers by now, since they have been around for over ten years now and I have reviewed most of their releases.  Sweet Chariot is their first album on the excellent German label Clostridium, and as always is the case with their releases, there is also a really cool die-hard edition with lots of extra goodies and this time on blue/red spilt coloured vinyl... Limited to just 97 copies, so it might already be hard to get, but there are also two other limited edition vinyl versions available.

I've been following Fred and the guys since the first album was released in 2004 and they never stop to impress me. Although you can of course hear some influences of 60s/70s/80's/90s psych/space/kraut/prog rock and acid folk, Earthling Society still somehow manage to sound like themselves. This time I do sense more influences from the Acid Mothers Temple, for example, but the album has its own magical, mystical and esoteric aura that very few bands can handle these days.

The album starts off with the very hallucinogenic, mid-tempo rock piece "Eddie" that has some Japanese spoken samples in the middle and loads of mind-altering effects. Superb! "All in a Dream" is a beautiful, dreamy acid folk song with nice vocals, some great guitar playing and spacey sound effects. The end part gets very experimental and far-out, I warn you... Also the next track "When a Child Cries and Angel Sighs" has that magical, psych/acid rock feel with wonderful Mellotron sounds and lots of space sounds. I like the way Fred uses effects on his vocals too. This one has great melodies. On the B side, "Sweet Chariot pt 1" is pure experimental, floating ambient soundscapes that lifts you high upon the ground for eleven minutes and more. On "Sweet Chariot pt 2" the AMT influence starts to shine though more and things get much more noisy and freaky. This will fry your brain! Another amazing album by Earthling Society that sounds so nice on cool high-quality vinyl! I hope that Clostridium will release more stuff by this great band.