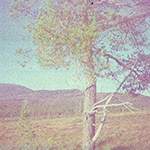 Adama is a new psychedelic rock band from Östersund, Sweden. Ruhin is their debut album and it was released this summer on a highly limited edition vinyl in nice gatefold cover as well as a digital download. I found the band by accident from one psych group in Facebook, and I'm glad I did. I don't know if they play a lot of shows but at least they were performing at the recent Copenhagen Psych Fest with bands like Moon Duo, Kaleidoscope, Spectrum etc. They fit really well into the present psych rock revival and the basis of their hypnotic, druggy and occasionally quite heavy sound is on bands like Velvet Underground, 13th Floor Elevators, The Doors, Spacemen 3, The Darkside, Loop, The Black Angels, Wooden Shjips just to name a few. The band uses lots of guitars, bass, drums and organ and all the tracks also have vocals.

The album kicks off with the mid-tempo "Levitate" that sounds like the Finnish band Black Lizard, and no wonder with so similar influences. "Close Line Between" brings vividly to mind Spacemen 3 and Loop and I love it. Next, "I Was Never Here" is a faster, pounding space rock piece and another winner. The shorter, bluesy acoustic piece "Next to You" is a nice snack in between all the electric rock on the album but definitely not one of their strongest works. The laid-back "Stuck" has a very hazy Spacemen 3 mode. "Countless Nights" has a strong Velvet Underground vibe and more organ as well. Just one simple riff on and on and it works. The ten-minute swan song "Blind Horse" is a dreamy, druggy and garage rock like number with some cool guitar and a repetitive basic riff and beat. The track gets heavier and more intense on its way, and there's also some solo guitar work. Very nice ending for the album! Ruhin is a very promising debut by this new band, and I hope they will evolve and produce more stuff in the same vein since they really seem to have potential. The album is available in some record stores, but your best choice is to order it directly from the band: adamaband@gmail.com.