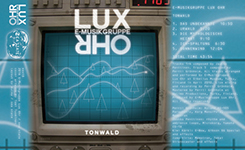 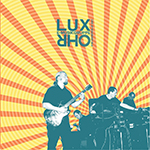 Turku, Finland has been pouring out some great sounds for a long time now and the cosmic/deep/ambient/electronic/Berlin School kraut act  E-Musikgruppe Lux Ohr is one of the best bands that the town has ever had to offer. The lineup features three guys on synthesizers/electronics/drum machine and a guitar player who uses lots of e-bow. I've been following them since the Live at the Sibelius Museum CD-R that was put out in 2010 and since then they have released two studio albums, one split album and one live album on vinyl as well as a couple of tapes. This Spring they put out the second tape and the live double album both in Germany, and let's check them out now.

Tonwald is a limited tape (140 copies) release of their live performance recorded at Sibelius Museum Turku, Finland in April 2010, so it's sort of a sequel to the first CD-R release that included a live set recorded at the same venue one year earlier. There are five tracks in the set and the whole length is almost 44 minutes. The both sides of the tape has all the tracks, so it's easy to listen to. You can just float the whole duration without the need to change sides! And float you will. As usual, the tracks on the set form a continuous musical experience so the tracks ("Das Unbekannte"/"Urwald"/"Die Mythologische Heimat"/"Ich-Spaltung"/ "Sonnenwind") are firmly woven together without any breaks. Even though this is a live recording, the sound quality is amazing and the music highly enjoyable. Only the last part has been released as a studio version on the debut album Kometenbahn so fans will get lots of new stuff (unless they were lucky enough to be at the concert, of course...). A very nice release, I'd like to have this on vinyl as well, please!

Live at Roadburn 2014 2LP includes three sides recorded at the band's performance at Roadburn Festival, Tilburg, The Netherlands, 12 April 2014 and the fourth side includes the long "Jenseits Der Mauer Des Schlafes" recorded at Bar Loose, Helsinki, Finland, 19 July 2013, where the band played at our Slip Inside This Club with German psych/acid rockers Vibravoid. Again, the sound quality is flawless and the mix very successful, and it's hard to hear that the tracks are live recordings. Great performances by the guys, and a very cool, cosmic and  spacey track selection including:

Kimi plays some wonderful guitar solos on this release, and the whole band is very focused and into it for sure. Both of these albums are warmly recommended for lovers of instrumental kosmische ambient music that makes you float in space and though other universes. Wonderful vibes!