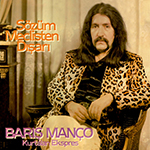 Anatolian rock is a music style that started to bloom in Turkey from the mid 60s combining Turkish folk music and Western rock and pop music. The roots of this music genre are perhaps already in the 50s when The Shadows made an impact also on Turkish soil. I'm not that familiar with this genre, but most of the psych rock fans must at least have heard about  the legendary Turkish psychedelic guitar player Erkin Koray. Barış Manço (born 2 January 1943, Istanbul - died 1 February 1999 of a heart attack) is one of the biggest and most famous names in Anatolian Rock. He started his career already in the early 60s releasing a lot of pop / rock'n roll singles in Turkey and France, where he also lived for some time. His first album came out in 1971, and by this time his music also included lots of progressive and psychedelic elements. You can expect to pay hundreds of euros for an original copy these days... He also worked as a TV host which of course helped making him popular.

Sözüm Meclisten Dışarı was originally released in 1981, and during this phase Barış played and recorded with Kurtalan Ekspres, a band he co-founded. By this time, the music also included lots of groovy funk influences. This album still includes some psychedelic guitar work and spacey synthesizers that along with traditional Anatolian vibes, a great rhythm section and amazing vocals in Turkish make this a very enjoyable album. The album starts off with a great duet with Deniz Tüney called "Alla Beni Pulla Beni", and I really like the combination of female and male vocals on this one. The next few tracks are perhaps not really that exciting and sort of reminds me of the more mainstream stuff that Demis Roussos released after his debut album. Some of the vocals are also in English. One of the highlights is the beautiful, cosmic and mystical ballad "Gülpembe". The groovy funk/boogie stuff begins on the B side with "Adem Oğlu Kızgın Fırın Havva Kızı Mercimek"! It's almost impossible not to dance to this sexy masterpiece... I also love the exotic melodies and vibes on "Ali Yazar Veli Bozar". The longest and most spacey track on the album is the instrumental "2025 (Üçüncü Ve Son Yolculuk)" that starts of with some weird, spacey Moog sounds. This brings to mind Vangelis or even Tangerine Dream! After four minutes a funky bass and beat is added to a great effect, and later on we also get some pretty progressive stuff. Amazing! Also the last piece "Dönence" is a marvelous, spacey, progressive and psychedelic number in the 70s space/prog rock vein (a bit like Eloy?!) and also has some spoken word before the vocals start in the middle. There's also a brilliant guitar solo in there when the funk starts again. Very nice and atmospheric stuff! The music has been remastered and the album is now released on both CD and vinyl so be sure to get a copy if you are interested in a cool example of genuine Anatolian rock.