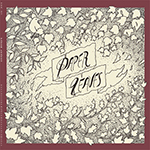 Paper Leaves is a new highly limited (just 200 copies) compilation LP put out by the legendary Ptolemaic Terrascope magazine from the UK. Ptolemaic Terrascope magazine was edited by Phil McMullen from 1989 - 2005 and nearly three dozen issues were published. At the moment the zine only lives in cyber space, but there are still a lot reviews etc. Paper Leaves includes eight tracks donated by the artists to keep the zine going, and is actually a very cool and enjoyable release.

Black Tempest starts the album with a cosmic, tranquil ambient piece "Terrascopula Tempestua" and the listeners are floating in space. 80s Psych pop master Nick Nicely offers a beautiful, melancholic track called "Dance Away" and I love it. Dead Sea Apes continue with their hypnotic space/kraut/psych rock track "Universal Translator" and take us into strange dimensions getting heavier during the journey. White Hills are without a doubt one of the leading stars on the present psych rock pantheon and I'm a huge fan. The instrumental "Thermal Head" presents the band's more experimental/heady style.

On the B-side Ben Chasny from Six Organs of Admittance performs an acoustic, folky cover of Wayne Rogers song "Dead and Rising", and this kind of folk music has always been one of the main interests of Ptolemaic Terrascope. Then we've got another "cover" as The Left Outsides do a beautiful and fragile version of the traditional folk song "Young Girl Cut Down In Her Prime". Wonderful! The Bevis Frond has always been closely tied to Ptolemaic Terrascope since Nick Saloman has been helping out a lot & donated many songs to the 7" EP's and later CD's that came with the original issues of the mag. "Back In The Churchyard" sounds like one of Nick's bedroom demos but as always, shows what a great songwriter and musician he is. One of my heroes! Bardo Pond from the U.S.A. are one of the most important underground psych rock acts of our time and they offer a majestic, dreamy and slow track called "Pumori" that is a very suitable finale for this marvelous compilation. They do speed up and rock out towards the end. If you are fast enough you might be able to score one of the very last copies of this vinyl album from the Terrascope site, after that it might be quite difficult. Warmly recommended!