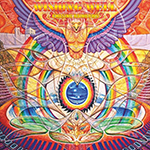 Wishing Well is a Finnish hard rock/heavy metal band from Helsinki that have been sending me their demos for a few years now. They have been okay but nothing sensational. I must say I was a bit surprised when I put on their first album Chasing Rainbows since this sounds a lot better! The band has gotten a bit more metal which is great. When I say metal, I mean true 80's heavy metal that makes your adrenaline levels rise and heart beat faster. It's almost impossible not to bang your head and pound your fist in the air, you know the feeling. The singer Peter James Goodman has a powerful, great voice that sometimes brings to mind Finnish superstar Kirka when he recorded his heavy rock albums in the early 80's or even Bruce Dickinson from Iron Maiden, but still not being a copyist by any means. Perfect vocals for this kind of music! For a special guest singer to one song ("Hippie Heart Gypsy Soul") the band has even somehow managed to get the legendary English singer Graham Bonnet, who we all old hard rockers know from bands like Rainbow, Michael Schenker Group and Alcatrazz.

The album includes nine original songs all penned by the guitarist Anssi Korkiakoski who also plays all the bass on the album. The first two are the melodic and catchy but still heavy title track that I really like and the fast power metal piece "Science Fiction". The first one sounds like old Tarot a bit, and on the fast one the drummer "Rip Radioactive really can show what he's capable of! The single track with Bennet, "Hippie Heart Gypsy Soul", is closer to late 70s hard rock, but still not as pop-like than Bennet-era Rainbow, for example. "Sacrifice" is a slower, doomy song that could almost be from some post-Dio Black Sabbath album. Cool! "Luck Is Blind" is melodic mid-tempo heavy metal also including some keyboards. Then it's time for the CD's first ballad, but the bit bluesy "I'll Never Let You Go" is my last favourite track on the album I'm afraid. I do like the acoustic lead guitar work, though, and things get more progressive (Gary Moore's Irish influences?) later on. "Sands of Time" rocks fast and hard again but with great sense of melody. I'm reminded of Helloween perhaps? the mid-tempo "Holy Mountain" sounds a bit like Iron Maiden and works very well. The album is finished with the great, atmospheric and beautiful ballad "Fire in My Soul" that brings to mind even some of the softer, emotional songs of Manilla Road, if I dare to say so. Very nice! All in all, every heavy metal/hard rock fan should check this album out since there's a lot to like for everyone in here. Extra points for the amazing cover art!