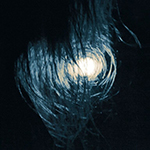 Värähtelijä is the fourth album by Finnish psychedelic, hypnotic black/occult metal band Oranssi Pazuzu. They have also released one split album with Candy Cane. This time the band goes even deeper into the dark, mesmerizing void of heady, heavy and trance-inducing atmospheres. They have perfected the combination of ultra heavy guitars and growling vocals with hypnotic and atmospheric vibes that put your mind on an never ending downwards spiral. You can hear influences of old-school and modern black metal, but they also have used a lot of different influences from Circle, for example. There are plenty of progressive and experimental elements as well. The second track "Lahja" could easily be a Circle track from the mid-nineties without the ghostly vocals. The dreamy, ultra-hypnotic title track also is more atmospheric and at first even brings to mind some post-rock groups. Having said that, the dark presence of evil can be sensed throughout the album, especially on the vocals and guitars. This is scary and deep stuff and definitely not for the lighthearted. The aggressive "Hypnotisoitu viharukous" is one of the most black metal oriented tracks, and won't let any fans of the genre cold (or should I say warm?). The longest track is "Vasemman käden hierarkia" that lasts for closer to 18 minutes! What a great, dark trip it is too... There are lots of different elements on this one, but it's all pure darkness and gloom. The album is finished with the almost ambient "Valveavaruus". If you can handle almost 70 minutes of mind-bending, soul-crushing madness without any sight of daylight, this album is a must-have.

The CD is already available and the 2LP will be released tomorrow, when the band also start their European tour playing at Kuudes Linja, Helsinki. Go check them out live too, if you dare! I know I will be there in a very hypnotized, out-of-this-world state and enjoying every second of it.