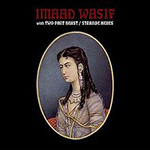 Imaad Wasif is a Canada-born, Los Angeles-based psychedelic/alternative/hard rock/pop/folk singer and guitarist who's been active in bands like Yeah Yeah Yeahs, Lowercase, Alaska!, The Folk Implosion, EFG & Grim Tower as well as putting out some stuff under his own name since 2006. I have previously only heard his third solo album The Voidist (2010 Tee Pee Records) that I reviewed for Psychotropic Zone and enjoyed pretty much. Strange Hexes that will be out in a month on World in Sound in Germany is actually his second solo album originally self-released in 2006. There was also a highly limited 2CD tour edition compiling both The Voidist and Strange Hexes in 2011, but this is technically the first time this album is wildly available in Europe.

Imaad has a really great, emotional and passionate voice that you immediately feel drawn to. I also really like his guitar playing. Other musicians on this album are Bobb Bruno (bass, keyboards, additional guitar) & Adam Garcia (drums). The CD comes in a cool digipak that also includes a lyric insert. There are 10 songs all written by Imaad. Stylistically they vary from melodic pop and fragile folk/country to heavy, fuzzy hard rock, sometimes even during one track (like on the opener "Wanderlusting"). At his heaviest Imaad sounds a bit like early 70s classic hard/heavy rock masters Black Sabbath or Led Zeppelin, but at softer moments I'm reminded of The Beatles, The Byrds, Bob Dylan etc. The album has a somewhat mystical, almost occult vibe throughout but it's not too strong or in-your-face. There are great melodies and moody and hazy atmospheres in these great, often melancholic compositions, and like the promo sheet says this can be recommended for fans of Dead Meadows, Espers and Black Mountain, among others. Also check out the latest single "Outlier" by his band EFG.