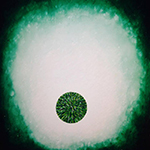 Vert:x is motorik, kosmische space/psych/kraut/drone rock band from Chester, U.K. It was founded by Neil Whitehead, who has recruited some like-minded friends to join in for live gigs as well as recordings. All the albums have only been put out on limited, self-released CD-R's, but in 2015 Neil produced some officially printed high quality CD-R's of all the albums that are available from the band. Vinyl freaks are also delighted by the fact that the band has collaborated with Fruits de Mer Records since 2011, so there is also stuff out on vinyl! I think I have previously reviewed all the other releases except the latest album Annwn, so I will now concentrate on that one.

I was delighted to notice that Fred Laird of Earthling Society has been playing with Neil, in studio as well as live, since the previous album, The Mindstealers (check out my review over here ). He has also produced Annwn, which I think means some progress  in sound quality. The music style still remains the same, so you can expect repetitive programmed beats, pounding, hypnotic bass, spacey effects & synth and heavy, experimental & psychedelic guitars. The music reminds me of Hawkwind, Chrome and Neu! but with a punky, rough touch. The wholly instrumental album has six tracks and lasts for 51 minutes. Fred's and Vince's fluent lead guitar work on several tracks  is perhaps the most noticeable change. The album starts off with the raw ten-minute mind-blower "A Witch" that seems to crush your skull with its heavy, repetitive riff and weird sound effects and stuff. Mugstar brings to mind, and I know Neil is a fan of theirs too. "Atom A.K." sounds more like space rock (especially Hawkwind/Farflung/Jet Jaguar style) and even has some melodies, very nice. "Surf Crayola" is a weird, dirty & experimental punk/surf piece, good to have something pretty different on the album. "Dead Zone" is the shortest track on the track at 3:03 and also has manipulated vocals on top of the heavy, pounding space rock, which is cool. The title track "Annwn" begins in a more esoteric, atmospheric way, but soon the motorik beat is added and here we go again. This still has a lighter, Neu! like vibe. Cool! The album is finished with the magnus opus "Yn Ol I Annwn" that lasts for almost 19 minutes. After the strange ambient drone intro, the space rocking begins again. Lots of strange and deranged stuff going on in this one... The last three of four minutes are just weird effects and echoes warping you mind pretty hard! What a great album, and it's great to have some fresh influences and ideas into the music.

The new 2015 versions of the albums A.F.M.O.M.A.H.E. and Ggantija have been expanded with some bonus tracks. The titles of both albums have an added "+" to make this clear... One of the best tracks from A.F.M.O.M.A.H.E still remains "Space Junk" that features Nico and Lavro from Croatian freak rock band Seven That Spells that gives this track a special vibe. The demos of "Cube Abuse" and "Ggantija" also work pretty well. Ggantija has a demo version of the slower "A.F.M. Speaks" that maybe is a bit lo-fi sounding, but still suits the vibe very well. One of the highlights from that album is the hypnotic opener "Orthostat". All the band's CD-R's are definitely wort getting if you like experimental, psychedelic and plain weird space/kraut rock. The band is also looking for a label to release a proper album so let's hope we can get a real CD and vinyl full-length by them soon.